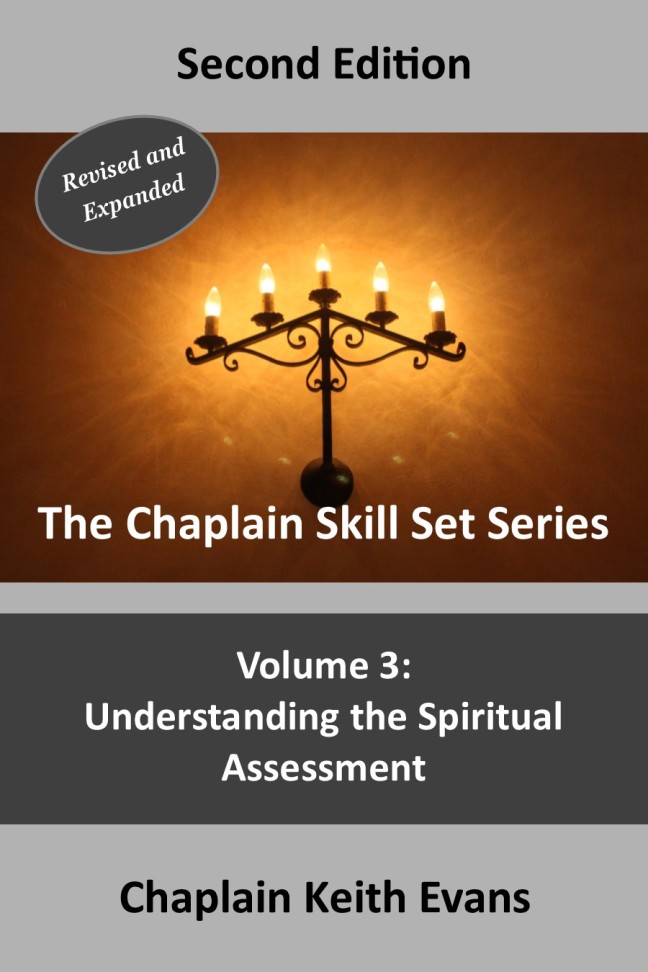 All three volumes of The Chaplain Skill Set Series have now all been revised and expanded and are now available in both print and e-book formats. Each volume has had substantial additions to clarify, support and validate the themes of each. These are great ministry resources for anyone interested in concepts and practical applications of public ministry.

Volume 1 (The Fundamentals: The Why, What, Who and How of Chaplaincy) has expanded sections on the theological and theoretical implications of chaplaincy as well as more current information on the impact and outcomes of workplace chaplaincy upon organizations. A full section of seven, real-life chaplain encounters have been added to the original e-book version. These verbatims are excellent exercises for readers to reflect and analyze the situations, to consider how they would respond in these situations in order to improve and sharpen their own skill sets for ministering effective soul care to those in need.

Volume 2 (Understanding Spirituality and World Faith Expressions) now includes an expanded conversation of how one’s worldview is informed and shaped by their spirituality or faith tradition. The faith expressions of secular/religious humanism, Buddhism, Hinduism, Islam, Jewish and Christian faith beliefs are all discussed. This text can be very helpful for ministers as they have conversations of ultimate life questions with hurting individuals seeking meaning and purpose of life events. A new section of four verbatims have been added to this volume.

Volume 3 (Understanding the Spiritual Assessment) now includes a fuller discussion of ten spiritual needs assessments noted in the literature and often used in healthcare settings by chaplains, social workers and physicians (ie. Fitchett’s 7×7 Model, FACT, FICA, HOPE, SPIRIT, Joint Commission, etc). The text also includes how workplace spirituality has been assessed in the past with a focus on how employees express their faith in the workplace. A new section of four verbatims was also added as practical exercises for readers.

All 3 volumes of The Chaplain Skill Set Series are available exclusively at Amazon.com: CLICK HERE.

If you would like a shorter, more concise overview of the core information in these expanded 3 volumes, then my book Essential Chaplain Skill Sets is also available in print or e-book format.

[This excerpt is from The Chaplain Skillset Series, Vol 2: Understanding Spirituality and World Faith Expressions. It is available as an e-book on Amazon.com. ]

Chapter One: The Need

I am a clinical hospital chaplain. You might also consider me a workplace (or marketplace/corporate) chaplain. I say that because I not only work with patients and families but I also spend a great deal of time in building relationships with the organization’s employees in order to minister to them as needs arise. My doctoral work centered on a ministry development project evaluating a specific workplace spirituality environment. The objective was to discover if there were new initiatives which could be implemented which could improve the workplace spirituality perception as well as the practical application of spirituality with employees. (I discuss the spiritual assessment of individuals and organizations in volume three of The Chaplain Skillset Series.)

It did not take long into my literature review and research endeavor to realize that I did not have enough experience with diverse world faiths. I did not truly understand how each faith and belief system expressed themselves (verbally and non-verbally) or how different beliefs guide daily decision making and a person’s perspective of hope, inner peace and life satisfaction. I needed to brush up on my understanding of spirituality expressions, and I needed to do it quickly. I asked myself, “How can a chaplain serving any workplace function to their greatest potential? How can chaplains achieve the best outcomes for their organization? Can this occur if the chaplain does not understand the spirituality and faith demographics of those he or she ministers?” This was where I found myself. Responsible, but not being held accountable. So I began an intensive self-study.

Most chaplains operate on the assumption that spirituality exists and every person possesses a spirituality, whether they fully recognize it or not (Marques, Dhiman and King, pp. 6-7). But one’s spirituality is not by nature or by definition solely about religion or religiosity. This principle has become a foundational pillar for my chaplaincy. Judith A. Neal states that most management authors and consultants in the field of workplace spirituality,

Define the human being as consisting of four parts or four types of energy: (1) Physical: Our ability to take good care of our bodies and physical well-being; (2) Mental: Our ability to think clearly, learn, and make good decisions; (3) Emotional: Our ability to create positive relationships and to handle difficult situations; (4) Spiritual: Our ability to connect to something greater than ourselves and to be of service in the world (Judith Neal, 2014).

One’s spirituality is the essence of who he or she is. It defines the inner self, separate from the body, but including the physical and intellectual self […] Spirituality also is the quality of being spiritual, of recognizing the intangible, life-affirming force in self and all human beings. It is a state of intimate relationship with the inner self of higher values and morality. It is recognition of the truth of the inner nature of people (Gilbert Fairholm, Capturing the Heart of Leadership, p. 29).

For scholars, it has taken many years to arrive at a consensus on how to define spirituality, as spirituality can be viewed from many perspectives. Christina Puchalski MD serves as the Director of the George Washington Institute of Spirituality and Health. In 2009 and 2014, Puchalski moderated a healthcare panel for spirituality and palliative care and assisted in producing a consensus definition for spirituality. The panel concluded, “Spirituality is the aspect of humanity that refers to the way individuals seek and express meaning and purpose and the way they experience their connectedness to the moment, to self, to others, to nature, and to the signiﬁcant or sacred” (Puchalski et al, 2014, p. 642).

Others perceive that spirituality stems from one’s inner consciousness and is the source behind the outward form of defined religious practices (Guillory, p. xi). Religion is more strictly defined as how one’s spirituality is practiced within a specific doctrinal or theological context. In a White Paper on professional chaplaincy, spirituality is explained as,

An awareness of relationships with all creation, an appreciation of presence and purpose that includes a sense of meaning. Though not true generations ago, a distinction is frequently made today between spirituality and religion, the latter focusing on defined structures, rituals and doctrines. While religion and medicine were virtually inseparable for thousands of years, the advent of science created a chasm between the two. The term spirituality is a contemporary bridge that renews this relationship (VandeCreek and Burton, 2001, p. 82).

Studies of the spiritual paradigm repeatedly reveal that “people not only work with their hands, but also their hearts and spirit” (Petchsawanga and Duchon, p. 190). Louis Fry’s research of spiritual business leadership observed that when a worker’s inner life is able to consistently fuel their hope and faith into a more transcendent vision of service in all parts of their life, they will begin to live life as it was created, as a precious gift (Fry and Nisiewicz, 2013). A problem which many chaplains possess is understanding the myriad of ways spirituality and diverse faith traditions are personally expressed and how it is later manifested in many ways throughout the individual’s life, including their work life.

An individual’s spirituality shapes their perspective of life and level of future hope. This is key to possessing realistic optimism and governs their daily resiliency when they are distressed or in the midst of crisis. Due to this principle, I will address whether or not each faith believes in a spiritual afterlife and what the path of salvation for each demands.

The reader is encouraged to delve deeper into each, as well as the hundreds and hundreds of ‘minor’ religions and faiths which are present in our diverse world. As previously mentioned, Volume Three of this Chaplain Skillset Series will discuss how to conduct individual spiritual assessments as well as to evaluate and organization or group’s spirituality.

Guillory, William A.  Spirituality in the Workplace: A Guide for Adapting to the Chaotically Changing Workplace. Salt Lake City: Innovations International, 2000.

Marques, Joan, Satinder Dhiman and Richard King. Spirituality in the Workplace: What It Is, Why It Matters, How To Make It Work For You. Fawnskin: Personhood Press, 2007.

Neal, Judith A. “Spirituality in the Workplace.” accessed May 22, 2014, http://judineal.com/pages/pubs/academic1.htm#spirit.

Petchsawanga, Pawinee, and and Dennis Duchon. “Workplace Spirituality, Meditation, and Work Performance.” Journal of Management, Spirituality and Religion 9, no. 2 (June 2012): 190.

VandeCreek, Larry, and Laurel Burton, eds. “Professional Chaplaincy: Its Role and Importance in Healthcare.” The Journal of Pastoral Care 55, no.1 (Spring 2001): 82.